It’s exciting to put a house on the market and to think about making new memories in new spaces, but we can have deep sentimental attachments to the homes we’re leaving behind, too. Growing emotions can help or hinder a sale, depending on how we manage them.

When it comes to the bottom line, homeowners need to know what it takes to avoid costly mistakes. Being mindful of these things and prepared for the process can help you avoid some of the most common mishaps when selling your house.

When inventory is low, like it is in the current market, it’s common to think buyers will pay whatever we ask for when we price our homes. Believe it or not, that’s far from the truth. Don’t forget that the buyer’s bank will send an appraisal to determine the fair value for your home. The bank will not lend more than what the house is worth, so be mindful that you might need to renegotiate the price after the appraisal. A real estate professional will help you to set the true value of your home.

2. Letting Your Emotions Interfere with the Sale

Today, most homeowners have been living in their houses for an average of 10 years (as shown in the graph below): 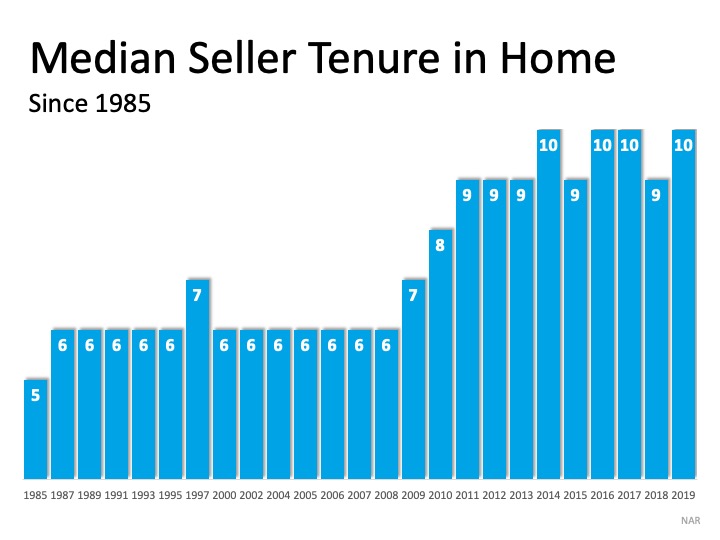 This is several years longer than what used to be the norm, since many homeowners have been recouping from negative equity situations over the past 10 years. The side effect, however, is when you live for so long in one place, you may get even more emotionally attached to your space. If it’s the first home you bought after you got married or the house where your children grew up, it very likely means something extra special to you. Every room has memories and it’s hard to detach from the sentimental value.

For some homeowners, that makes it even harder to negotiate, separating the emotional value of the home from the fair market price. That’s why you need a real estate professional to help you with the negotiations in the process.

3. Not Staging Your Home

We’re generally quite proud of our décor and how we’ve customized our houses to make them our own personalized homes, but not all buyers will feel the same way about your design. That’s why it’s so important to make sure you stage your home with the buyer in mind. Buyers want to envision themselves in the space, so it truly feels like their own. They need to see themselves in the space with their furniture and keepsakes – not your pictures and decorations. Stage and declutter your home so they can visualize their own dreams as they walk through your house. A real estate professional can help you with tips to get your home ready to stage and sell.

Today’s seller’s market might be your best chance to make a move. If you’re considering selling your house, let’s get together to help you navigate through the process while avoiding common seller mistakes.

In September, America’s home sales climbed 8.1%, representing the largest year-over-year increase since 2016, according to the RE/MAX National Housing Report.

RE/MAX reports that September’s annual increase was the largest September increase since 2013. Although this was accompanied by an August-to-September decline of 17%, it was still significantly less than the month-to-month plunge of 24.4% in September of last year.

Once again, buyer demand outpaced home sales, resulting in the largest inventory decline in over a year.  The report indicates that the number of homes for sale dropped 6.1% from 2018’s level, marking the third consecutive month of annual declines.

According to RE/MAX, September posted a 3.2-month supply of inventory, falling from a 4.2 month supply in September 2018. Homes spent 46 days on the market, which is one day longer than they did last year.

Despite September’s inventory woes, Adam Contos, the CEO of RE/MAX Holdings said it was encouraging to see the improvement in September home sales, especially given how tough last September’s results were.

“The market still poses some challenges for buyers – framed by rising prices and shrinking inventory – but we’re moving into the fourth quarter on much better footing than we had a year ago,” Contos said. “As we begin to lap the end of last year and its persistent sales declines, the housing market’s momentum increases the chances of seeing more months of strong year-over-year gains in sales.

NOTE: The RE/MAX National Housing Report is based on MLS data in approximately 53 metropolitan areas, including all residential property types, and is not annualized. For maximum representation, many of the largest metro areas in the country are represented, and an attempt is made to include at least one metro from each state.

Thank you for submitting a private showing request! This window will close shortly.

Thank You For Signing Up!

An email confirmation to . You can continue to browse all real estate listings while also saving them to your profile. If you have any questions, please email us.
Loading